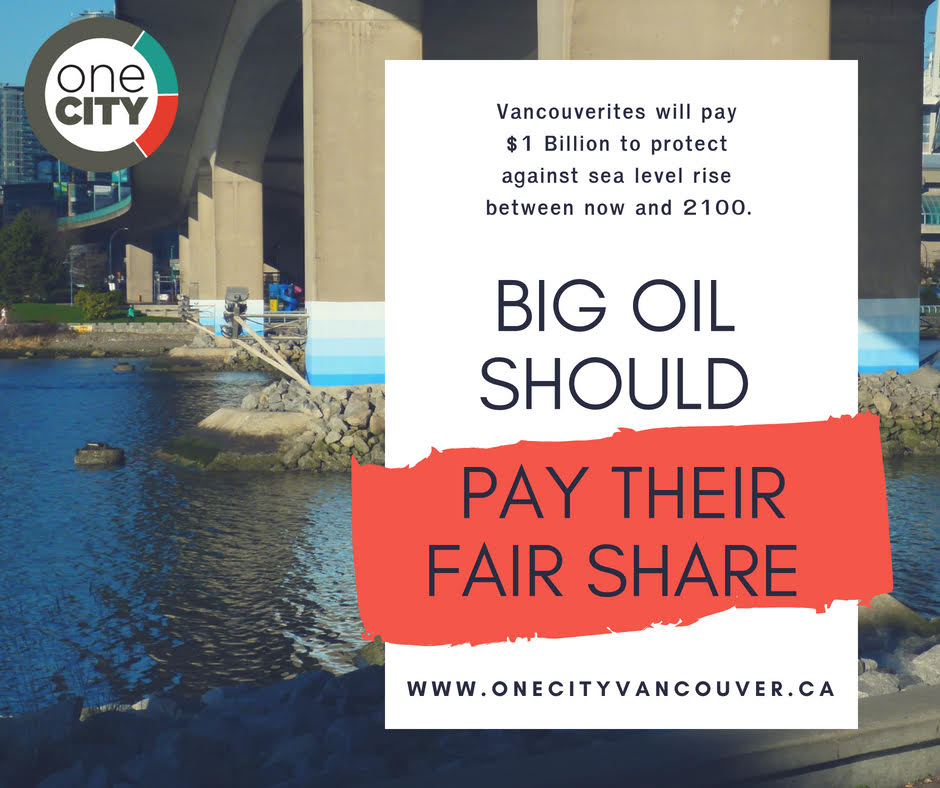 The impacts of climate change are creating significant costs for local governments, both in mitigation and adaptation. A recent City of Vancouver report estimated that Vancouver would pay $1 billion on flood prevention between now and 2100. Infrastructure to mitigate the effects of rising sea levels is just one small portion of the costs to come. Our city has already seen some of the impacts of climate change this summer with smoke from wildfires and water shortages due to lack of rainfall and reduced snowpack on our local mountains, however, in the future we can also expect storm and sewer backups, costs for cooling shelters and heat shelters for vulnerable populations, and more.

“We’re all responsible for climate change. Big Oil corporations should pay their fair share,” says OneCity Council Candidate Christine Boyle, a climate justice activist and United Church Minister. “This is an important step in defending our community, while sending an international message to the world’s fossil fuel polluters.”

OneCity is committed to ensuring that fossil fuel corporations are held accountable for their role in causing climate harm, and that they are made to pay their fair share of the ever-rising costs of preparing for (and rebuilding from) the impacts of climate change. We will do this by joining cities across the globe (including NYC, and 10 other BC municipalities) in taking legal action against the largest fossil fuel corporations.

OneCity is advocating that the City of Vancouver join British Columbia municipalities (supported by West Coast Environmental Law) in exploring how taking legal action could assign liability and help claim compensation for the costs of preparing for climate change.

“Vancouver should explore all options - including legal and financial options - for ensuring cost-recovery for these future infrastructure costs,” says OneCity Council Candidate Brandon Yan, a community and sustainability advocate. “The climate crisis is impacting us now, it’s time we take action that matches the scale of the problem.”